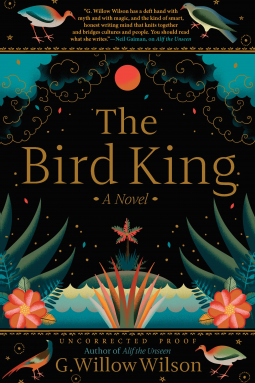 The last Muslim emirate of Spain is living its last days before surrendering to the Catholic kingdom. Fatima is a concubine to the Sultan, and has lived all her life in the palace. Her only real friend has always been Hassan, the royal mapmaker with the extraordinary ability to create maps of places that never existed before.

When the Catholics finally arrive, they’ll plan to take Hassan to the Spanish Inquisition. And Fatima is not about to let that happen.

Welcome to a fantastic story of wild chasing, desserts, sea battles, and magical lands. Fatima and Hassan will embark on a special journey. One that’s a matter of life and death. In their paths they’ll find Jinns, magical places, and strange animals. Some of them will help, some will try to stop them; but none of them ever becomes a greater threat than the evilness of human beings.

Willow Wilson’s writing immediately transports the reader to a new, magical place. The descriptions are so vivid, it’s easy for the palace of Granada to come alive before your eyes. Fatima and Hassan are two very different people. But, by the end of the book, you won’t stop feeling very attached to both of them.

Embark on a special adventure with a strong-minded woman that’s fighting for her freedom and a wise, magical man who’s fighting for his life. This isn’t only a journey of different places. It’s also a personal adventure, one that will transform the heroes internally and leave them changed forever. Where will life lead them? Will they finally find the land of the Bird King?

The Bird King is an exceptional book, one that all fans of fantasy will adore.